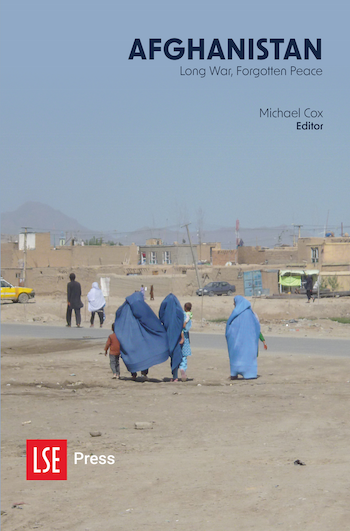 Afghanistan has been in the headlines for many years – but tragically for all the wrong reasons. First invaded by the Soviets in 1979, the country then experienced the trauma of civil war followed by yet another intervention, this time by the United States and allies, which ended with the West’s ignominious withdrawal in August 2021. Afghanistan: Long War, Forgotten Peace examines multiple dimensions of what happened and why, and what the future holds for the country now the Taliban are back in power.

Multidisciplinary in approach, this book features analysts from a variety of academic disciplines, including policy-makers and public intellectuals – many with direct experience of having lived and worked in Afghanistan. It explains why the Taliban finally triumphed, what this means for Afghan society, and how competing actors in the international system have reacted to the Taliban takeover. Questions include whether the West’s withdrawal represented a major or only a temporary setback for NATO and the United States, and whether and how there can be any amelioration of the situation in Afghanistan itself. The country and its people face multiple interrelated challenges, including those of women’s rights, the drugs economies and human trafficking and exploitation.

This volume is essential reading for all those concerned with what happens in Afghanistan over the coming months and years, the consequences for the Afghan people – and for the rest of the world.

“In this superb volume, Michael Cox has brought together a distinguished and interdisciplinary group of scholars to reflect on Afghanistan’s troubled recent past. Chapters range widely, probing the social challenges and religious upheavals within Afghan society as well as the regional geopolitical struggles and military interventions that have left the country so desperately in need of a better future. The book is essential reading for both scholars and policy-makers.”

“Published in the midst of ‘Putin's Afghanistan’ in Ukraine, this bracing, salutary collection of essays reminds us that the original Afghanistan continues to suffer from decades of misconceived, sometimes disastrous, foreign adventurism and internal misrule. Written by a group of expert and thoughtful authors – knowledgeable, and adept at teasing out the broader implications of the war – the volume never forgets to put Afghanistan and the Afghan people back at the centre of their own story.”

“Afghanistan Long War, Forgotten Peace provides a unique, multidisciplinary approach employing different perspectives to explain how the West first became involved in Afghanistan, why in the end it left, and with what consequences. A brilliant volume that makes it possible to fully understand why NATO’s intervention failed and why the Taliban have returned.”

Professor Vittorio Emanuele Parsi, Professor of International Relations and Director of ASERI at Università Cattolica, Milan. Author of ‘Inevitable Alliance: Europe and the United States Beyond Iraq’ and ‘The Wrecking of the Liberal World Order’

“The Afghan tragedy still has a long way to go, writes Professor Michael Cox in his introductory essay to this excellent volume with contribution by leading experts in the field. Collectively, they draw critical lessons from an over 20-year long failure, showing that many of the mistakes made could have been avoided, and many of the opportunities lost, realized. What better advice could there be for students of international relations and politicians alike to ensure that such a tragedy will not repeat itself!”

Professor Helmut Anheier. President of the Hertie School Berlin (2009 to 2018) and Adjunct Professor of Social Welfare, Luskin School of Public Affairs, UCLA. Author of ‘Nonprofit Organizations: Theory Management, Policy’ and ‘The Future of the Liberal Order: The Key Questions'

These are words or phrases in the text that have been automatically identified by the Named Entity Recognition and Disambiguation service, which provides Wikipedia (

) links for these entities.

How to cite this book

This is an Open Access book distributed under the terms of the Creative Commons Attribution 4.0 license (unless stated otherwise), which permits unrestricted use, distribution and reproduction in any medium, provided the original work is properly cited. Copyright is retained by the author(s).